I’ve long suspected that most of the people who participated in anti-war demonstrations during Bush’s presidency were not so much motivated by a deep opposition to “the war” so much as by a visceral hatred of President George W. Bush. If the dismal turn out at the recent protest against the War in Afghanistan is any indication then my theory may be accurate.
International ANSWER, who at the height of the Bush years could easily get thousands of people to march in opposition to the wars in Iraq and Afghanistan, can now barely get 100 people to show up for a protest… And, of the 100 or so people who did attend the “8th Anniversary Protest Against the War in Afghanistan”, nearly all of them were either the same smelly old Communists who show up at every leftwing demonstration, or the usual clique of 9/11 “truthers” who regularly gather at various locations around Los Angeles to annoy tourists.
top right shadow 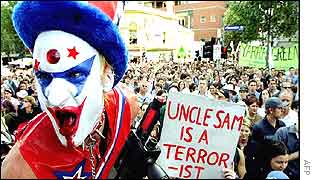